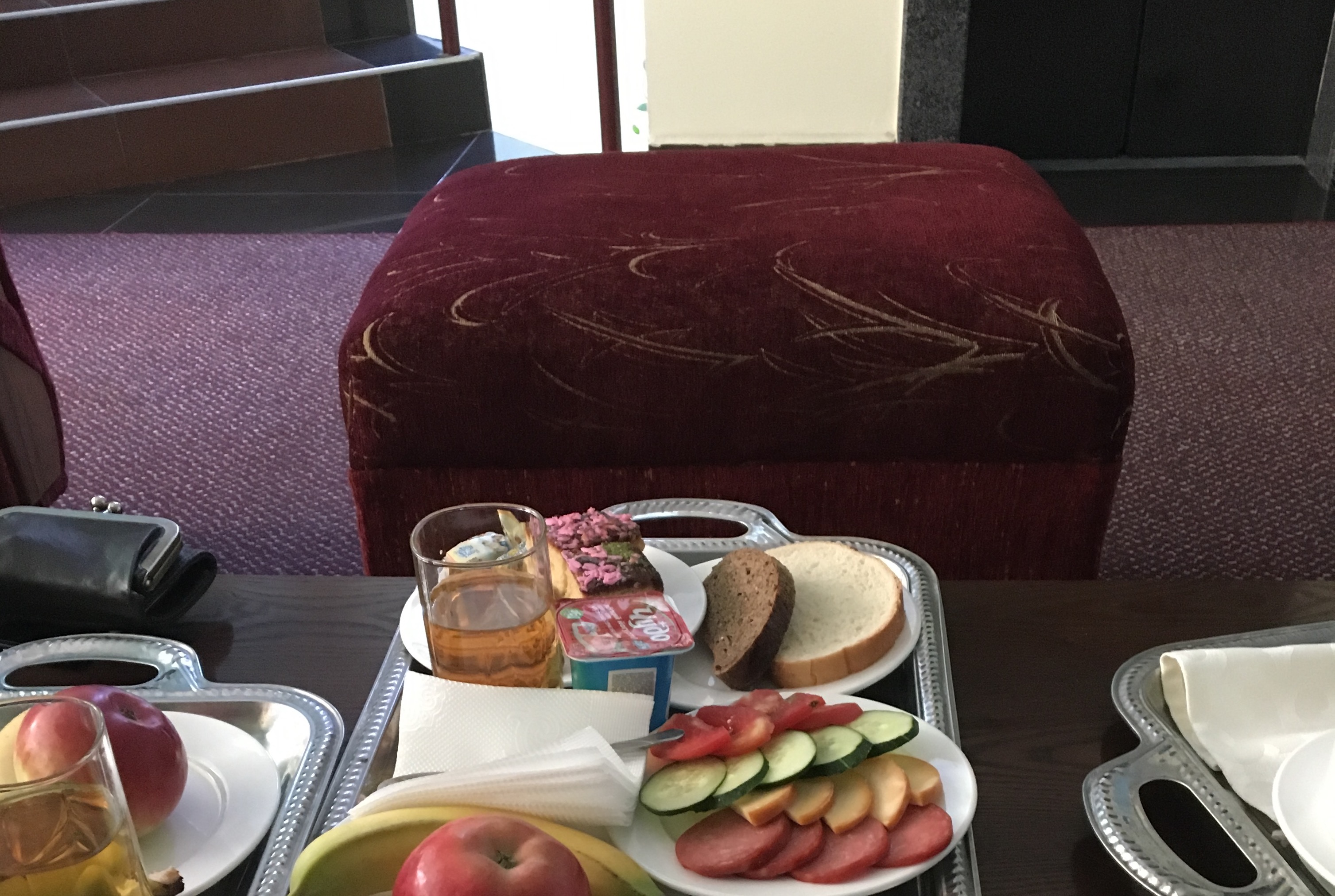 These were some notes that I made on the morning of June 8, 2017 while sitting in the Urmat Ordo hotel in Bishkek. Edited for spelling and grammar.

An attempt to have a cohesive summary of what happened:

In the past week and a half, I have been recovering from illness. It appears that I contracted some type of virus, either a flu-like virus or an enterovirus (which affected the brain). Either way, I had a fever for over a week (from Saturday, May 27 to Sunday, June 4).

When the fever first started on the evening of Saturday (May 27), I initially believed that I had a very minor illness and that it would go away soon. My symptoms included fever and headache. My main concern was just wanting to get back to work and being able to help with the Connecting to Your Disciplines program. I was mainly using acetaminophen (Tylenol, aka paracetamol) to help deal with the fever and headache.

When I was still not better on Monday (May 29), I went to the campus nurse in order to make sure everything was ok. Because my fever was relatively high, she took me to the diagnostic center where I was prescribed a variety of antibiotics while I told that I probably had the flu (though there was a language barrier). The prescribed treatment (antibiotics) didn’t seem to match the diagnosis (flu, which is a virus) so I did not take any of the antibiotics. I merely continued to take acetaminophen (paracetamol).

During the worst of this fever I had delirium and could not think clearly (Wednesday May 31 and Thursday June 1 in Naryn). I was extremely paranoid, incapable of rational thought, and very scared. On Wednesday night I went to Robin in the evening (11 pm?) because I was starting to experience racing thoughts that were extremely cynical, cyclical, and contradictory. Robin and I stayed in the empty apartment next to her room that night. I experienced extreme paranoia and confused thinking which prevented me from getting sleep. I was convinced that I was in a simulation room and had to win the simulation game in order to be allowed to sleep. I was taken to the Naryn Diagnostic Center on Thursday morning when I continued to act irrationally and went into convulsions due to my affected thinking.

After my treatment and a good night’s sleep on Thursday, in which I felt much better physically, I was taken to Bishkek on Friday morning (June 2) to get further medical testing and treatment. I was accompanied by robin and the first person we saw was a psychologist at AUCA at 1 PM.

The psychologist believes that I experienced a psychotic episode on Wednesday and Thursday while on campus in Naryn. However, she also said that she believes all psychological symptoms were purely secondary and were the effect of prolonged fever and/or brain inflammation from the virus. This was extremely comforting news to me at a time when I was still uncertain whether my condition was purely physiological or whether it also concerned my psychological health.

Immediately after the visit to AUCA, I was taken to the NeoMed clinic where I met Dr Olga. I had an ultrasound, chest X-rays, and blood tests (which were inconclusive because my temperature was too high and I had eaten food??). Olga referred me to the State Infectious Diseases hospital as the fever was still very high. Iskender from the Bishkek office arrived and tried to find me a bed in a private clinic (he knew the state hospitals were not good) but was unable to find a place that was willing to take me.

Robin, Iskender, and I went to the State Infectious Diseases hospital in the late afternoon. It was clear while we were there that the facilities were not very good and that the doctors were overworked. We waited for 3 hours as my doctor ran back and forth between patients and tried to figure out where to place me. I was unable to secure a bed in the State Infectious Diseases hospital (they had run out of beds and were contemplating putting a bed in a hallway for me), so Iskender from the Bishkek office was able to place me in a local hotel (the Urmat Ordo) with a nurse who would administer IV and antibiotics twice per day. The nurse visited me that night (still June 2) and gave me IV and antibiotics. I also took paracetamol in order to reduce my fever. After this I was able to sleep.

On Saturday June 3rd in the morning (8:30 am?), Robin and I went to the URFA clinic to have a comprehensive blood test and urine test. We were told that my blood test results would be ready on Monday (June 5) between 4 PM and 5 PM and that because I was unable to produce urine on the spot, I should bring a container with urine on Monday morning. The nurse gave me my second IV and antibiotics later in the morning in the Urmat Ordo. My temperature was still high so I continued to take paracetamol. Robin had to leave to go back on campus so Chynara took her place as my caretaker in the Urmat Ordo. I received another round of antibiotic injections in the evening. I was able to sleep soundly.

On Sunday June 4, the nurse visited me twice and administered antibiotic injections. I did not eat any thing after 12 (not did I have paracetamol after 12) in order to have a good urine sample the following morning. On this day in the evening, I took paracetamol for the last time, as by June 5 in the morning my fever would not return (though I remained unsure if the fever would stay gone).

On Monday June 5, Chynara took my urine sample to the URFA clinic. Following this, the nurse came and administered antibiotics. At 5 PM, I obtained my blood and urine test results from URFA. The results showed elevated levels hemoglobin and very high levels of liver enzymes but otherwise was negative for diseases such as Hepatitis A,B,C. Chynara scheduled an appointment with Olga at NeoMed for me the following morning as she was already done for the day.

We sent these URFA results to Robin’s friend Ruth, a Canadian doctor. She called and told us that she believed that the tests indicated that I had some type of virus (possibly enterovirus as they can cause brain inflammation, which would explain my irrational thinking on May 31, June 1) and that my body had recently gotten better. However, she also warned that if my fever came back I would have to do more tests and possibly consider leaving the country if the Kyrgyz health system lacked the capacity to do advanced blood culturing and antibody tests to identify specific viruses.

On Tuesday June 6, I visited Dr. Olga with Chynara in the morning. She looked at the URFA results and also concluded that I had some type of virus and my body had possibly just recovered.

Dr. Olga felt that I needed to continue my course of antibiotics in order ensure that my fever would stay gone for 72 hours. She thought that there was a chance that the fever could return if I stopped the antibiotics at that point, which would reverse the progress we had made for the past few days. After the 72 hours, I would stop the antibiotics and then watch my temperature for another 24 hours, after which we could be fairly sure that the fever was gone for good.

She also wanted me to start a medicine called Heptral in order to heal my liver, which was enlarged and had high levels of liver enzyme.

On Wednesday June 7, I received one dose of antibiotics from the nurse in the morning and my last dose of antibiotics at 9:30 PM at night. Throughout the day we measured my temperature. At the end of the day, my fever had been gone for 72 hours. I slept soundly and perhaps the most deeply on this night than I had slept in several days.

Today is Thursday June 8, and I’m closely watching my temperature on my first day off of antibiotics.