798艺术区, the 798 Art District of Beijing is my favorite dot in a city so populous and sprawling that it has to be sectioned into 6 rings. The lines are drawn by 6 ring roads, which run in a circle around the city and bring you right back to where you started. The rings lie concentric to the center of Beijing, marked by all the main tourist attractions that millions and millions of people visit every year: Tiananmen Square, the Forbidden City, the Great Hall of the People. There is talk of a 7th ring road, one that would run 1,000 km, clear into the Hebei Province to the north. But for now, it is just talk.

I’m drawn to 798 four times during my two months in Beijing. It’s on the fringes of the city, lying out in the northeast corner of the 4th ring. Since I’m coming from the Haidian district in the northwestern corner of the 3rd ring, the commute is nearly 2 hours long one way. Around 10 metro stops, followed by about 5 more bus stops. This distance from government authorities, along with cheap rent, drew artists and the bohemian community out to the derelict and abandoned warehouses and lofts in the 1990s.

798 is named after Factory #798, a decommissioned factory built in 1954 that made military materiel under the Socialist Unification Plan. Factory #798 was just one factory within a larger complex, the 718 Joint factory which sat on 500,000 acres of land. Factory #798 was probably not unlike the 797 factories that came before it in terms of function.

Its form, however, is another thing entirely. Designed with East Germans in a joint factory project, 798 is an exhibition of Bauhaus design. Bauhaus, the German, 20th century modernist art school, lends these buildings a grace and functionality completely absent from the ornamentation, heaviness, and blockiness of Soviet-influenced architecture in other parts of Beijing. 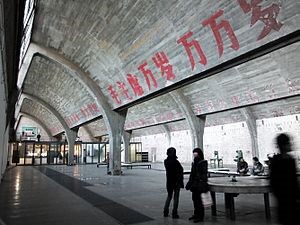 I meander along the narrow streets of the massive complex. The roads are named 796, 797, 798, 799… Swank galleries housed in industrial concrete line the streets. Big names have exhibited in 798— Huang Rui, Ai Weiwei, Christian Dior. There are rusting motorcycles alongside fancy foreign Benzes and Alfa Romeos. The artistic community is worried about gentrification but corporate cashflows also bring money for projects.

A handful of rows of shark-fin buildings lie parallel to each other. Like ribs expanding with inhaling lungs, arches swoop up to support the curved wall of each structure. On the flatter side of building, windows are cut into the top to give the building natural sunlight, which illuminates the side of the curved factory wall. Painted in thick red strokes, a chant reserved to hail ancient Emperors, gods on earth. 毛主席 万岁 万万岁. Chairman Mao, Ten Thousand Years. A Hundred Million Years. Long live Mao.

It is strange to see these red inscriptions high up on the wall and the world class modern art exhibited below. Strange enough to pull me into its orbit 4 times, each time across 5 ring roads.